With so much talk about diversity, and its bedfellow inclusiveness, older people are too often left out.

According to this article in Marketing Week, based on research from UM, two-thirds (68%) of British people aged 65 and older believe ads often stereotype people their age. 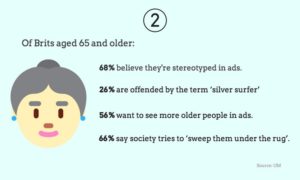 It’s amazing to me how we still need research to tell us the blindingly obvious.

The research also revealed that ‘the lack of tech skills’ was the most frustrating (mis)perception among older people.

26% are offended by the term ‘silver surfer’ and 33% think perceptions of older people have got worse during the last three years.

However, almost half (46%) of the general public want to see more older people in adverts, with that figure climbing to 56% among people over 65.

When asked why older people don’t appear in ads, 44% of consumers believe it’s because they ‘don’t appear attractive to audiences’ and 66% of those over 65 believe society tries to ‘sweep them under the rug’. Incredible when we know that this is the largest, fastest growing and wealthiest segment of population in most developed markets.

The average age of marketers and advertising folks in the UK and Australia is around 33 years. No wonder then, that these out-dated stereotypes perpetuate.

Just think, Bill Gates is now 62 (and Steve Jobs would have been 63). They inspired a generation of people now being talked to as though they’ve never used a computer or a cell phone before.

Check out this ad from T-Mobile ONE in the USA in which the CEO tackles this issue to his company’s benefit.