Data just out shows that the fastest growing segment of Facebook users are over 55 years with more than 1 million extra users over 65 years-old expected to join this year in the USA alone.

In the UK too, the largest growth will be among older users, with 500,000 new users 55+ expected to join Facebook this year. In total there will be 6.4 million Facebook users over 55 years of age, making it the biggest demographic except for 25 to 34-year-olds. (See chart below) 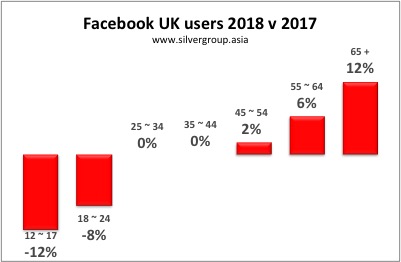 Meanwhile, younger users are abandoning Facebook in favour of Snapchat according to this article from the Guardian. 700,000 UK teenagers and young adults will leave Facebook in 2018.

Facebook appeals to older people because of their desire to keep in touch with children and friends – and the expanding luxury of time to do so. It is in some respects, an antidote to loneliness – one of the greatest killers of our time.

Watch for more age-relevant advertising on Facebook as advertisers wake up to the power of this medium to reach their older, wealthier consumers. 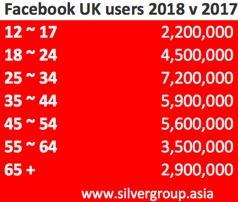