Ageing skiers are gradually and inevitably giving up the sport. The problem is that the numbers are not being made up fast enough by younger skiers.

Demographics plus the impact of global warming, pose a dual threat to the skiing industry. 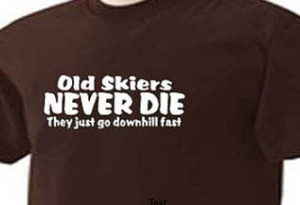 According to this article in the Economist magazine, the number of skier-days (visits to ski slopes for part of or a whole day) in the world’s main ski destinations fell from about 350m in the 2008-09 season to about 320m in 2015-16. This includes declines across the developed world and, most markedly, in fast-ageing Japan.

The drop would be bigger still were it not for breakneck growth in China, where skier-days nearly tripled in the same period to 11m.

In America, over-55s make up about a fifth of skiers; the most avid are ageing skiers 72 and older.

The Economist article suggests several reasons why younger skiers are not filling up the ranks;

My guess is that most resorts are not age-friendly and have done little to accomodate the evolving needs or their older skiers. They remain temples optimised for the young and fail to accomodate the 25 effects of physiological ageing that we will all experience as we get older.