Every day, week, month and year ‘new’ people are turning 50, 60 and 70 and in so doing, they change forever the outdated stereotypes often held by younger marketers.

To remind the context, “the older consumer market is is the largest, fastest-growing (in some cases the only growing) segment of population in most developed markets of the world. In Asia-Pacific, fifty-four percent of high- net-worth individuals are over 56 years of age”. 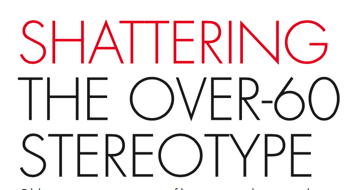 This is one of many statements I was quoted on in the special article in Campaign Magazine’ titled; Shattering the over-60 stereotype.

Research company Mintel conducted a study which revealed that Asia’s older consumers are just as dynamic as younger generations, and that while achieving good health is the most important goal for the majority of seniors, after that they want to spend on experiences and active lifestyles.

In China, Mintel’s research found that after spending on health, almost half of consumers aged 55 to 74 said they wanted to spend money on being entertained and on social events. They also wanted to spend more time travelling than shopping.

Despite this and other evidence of the breakdown in ageing stereotypes, why is it that the majority of brands currently targeting China’s 55-plus age group still fall into categories such as dairy products (particularly milk formula), cereals, or hot beverages?

These are what we call ‘Age-silo‘ products and services – things that match our stereotypes of older people.

But the other, arguably much greater opportunity is in the area of ‘age-neutral‘ products and services. Things that affect the way we look, feel and think that are equally consumed by adults of all ages.

one of the keys to unlock the older market is to broaden your customer net by adopting more ‘inclusive’ communications and by ensuring that the entire customer experience (including product design and retail presence) are formed and marketed in a way that allow them to remain relevant and accessible to customers of all adult ages. We call this; Lifetime Customer Experience.

If you’ve read until here and are still interested, the full Campaign article is available here;