If evidence were needed to prove the folly of outdated stereotypes, look no further than the rates of tech adoption among older consumers.

While it is true that seniors consistently have lower rates of technology adoption compared with younger ‘digital natives’ take a look at some findings from this Pew Research report.

Although based on the American consumer, adoption and usage among seniors in developed European and Asian countries, are comparable.

The Pew report defines seniors as people over 65. 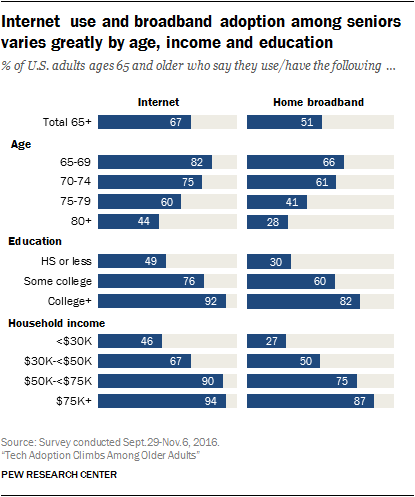 As we’ve found in other studies, age is not the only determinant for tech adoption. Many seniors who are older, less affluent or with lower levels of educational attainment continue to have a distant relationship with digital technology. While younger, more affluent and more highly educated seniors – report owning and using various technologies at rates similar to adults under the age of 65.

As each year passes, age becomes a weaker predictor of consumer behaviour in general and businesses that stick to outdated stereotypes are in danger of misreading their market.

When designing online customer experiences, the needs of potential customers of ALL adult ages should be considered to avoid barriers to purchase.

We call this, Lifetime CX.

How? As covered extensively in our book; Marketing to the Ageing Consumer, we need to understand the physical changes everyone experiences as they age and adapt the customer experience to accomodate them.