When one thinks about ageing societies and dependency ratios, Japan and Germany are usually top of mind.

But this chart from Goldman Sachs shows that countries of Asia pacific are catching up fast on the older parts of the planet. 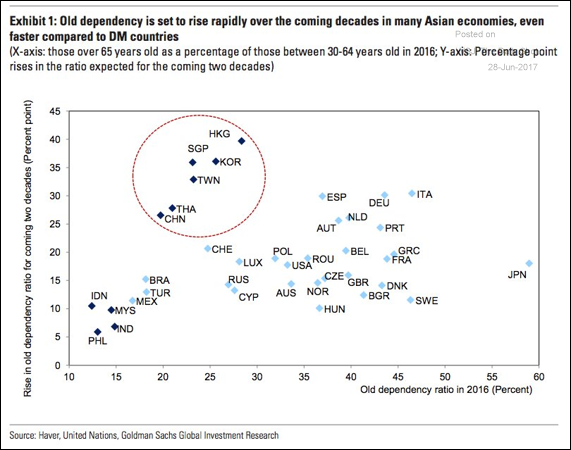 India, Philippines, Malaysia and Indonesia have low dependency ratios are not going to change much in coming 20 years.

European countries including Spain, Germany and Italy are all high now and expected to increase a lot.

The implications of higher dependency rations on an economy are profound. I’ve summarised some key points from a more detailed explanation here.

A growth in the non-productive population will diminish productive capacity and could lead to a lower long run trend rate of economic growth. Likely to be increased pressures placed on government finances, leading to higher borrowing or higher taxes which also reduce economic growth.

The retired population will make up a bigger share of the population. Therefore, they will have a bigger political voice resulting in more attention to how we care for older people.

A challenge for governments and a massive, under-exploited opportunity for business.