While it may not have been Reeboks primary intention, I’m pretty sure this ad campaign will promote more age-inclusive thinking in China.

Campaign magazine focussed on how the advert represents the brand’s drive to associate itself more with pull-up bars, kettlebells and medicine balls than basketball hoops. But what interested me is the positive use of younger and older talent, in the same spot. A rare example of age-neutral marketing. (For me, the most memorable intergenerational campaign was created for Guinness (UK) a few years ago).

Reeboks ‘Be more human’ campaign is a call to inspire Chinese people from all walks of life to strive to achieve their full potential through fitness. That’s why so called Grandpa Wang (no, I don’t think that’s disparaging), a fashion model and artist who only seriously got into fitness at the age of 70, makes sense.

To me, it’s a message about longevity.

According to the Campaign article, it’s not a stretch to say his example has helped reshape China’s views on ageing.

No doubt people will draw parallels with this campaign and the relatively recent (unofficial) Adidas ‘Break Free’ running commercial produced by a German film student, which I wrote about here. But the difference is stark.

The Reebok ad is ageless or age-neutral, the adidas student effort was arguable ageist. 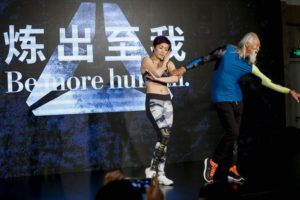