Anyone who has visited China will have seen the hordes of park dancers who flock to the public parks to get their daily dose of exercise and socialisation. A few years ago while in China advising one of the worlds leading sportswear brands on the ageing consumer, I suggested that the company could develop a line of clothing and footwear for this lucrative and exploding market. Think LuLuLemon for park dancers.

Needless to say, the young marketers and their European headquarters scoffed at the idea for fear of the negative impact such an initiative might have on their overall brand image. I pointed out them that Apple manages to remain a cool, youthful brand yet sells most of its computers to people over 50! 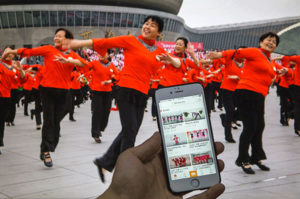 Back to the parks of China, square-dancing has long been a popular past-time among some of China’s elderly and middle-aged folk. Now, there’s an app that aims to give China’s square-dancing aunties an edge to perfect their routines. Reported here in the China Daily.

The Tangdou Square Dance app, which caters to elderly and middle-aged women who live a more leisurely life and like to dance in public squares during their spare time, offers services such as free dancing tutorials and a communication platform to connect dancers in local communities. I tried but cannot locate this on the Apple Store.

Daily active users of the app have reached more than 2.5 million, with monthly active users hitting nearly 40 million, according to Tangdou, a Beijing-based software developer.

Now imagine if the client mentioned above had developed the line I recommended, this app would be the perfect medium to selective reach out, promote and sell to this audience.