As the marketing world slowly wakes up to the inevitability (and potential) of the ageing demographic, we are likely to see more older people featured in brand advertising.

Already there is a growing library of ads featuring older people and their stories. Most of them are attempting to trigger empathy, sympathy or other emotions that might encourage us to buy. Perhaps we just got tired of seeing extraordinary babies and animated animals in TV commercials, and this is just the new trend?

But as common sense and this article from Campaign magazine points out, stories around older folks don’t always trigger positive brand responses.

A particular case in point is the highly emotive (unofficial) Adidas ‘Break Free’ running commercial produced by a German film student. Although not officially broadcast, this commercial has achieved an incredible 11.8 million views on YouTube! Yet, despite the groundswell of public opinion and interventions from various celebrities to get Adidas to support the ad, Adidas has abstained.

The over-riding assumption is that a brand becomes easier to choose when it has made us feel good in its advertising.

However, based on on independent research that aims to determine the link between emotional impact and profitability, Adidas was right. The ad did not test well in any of the test markets (USA, Germany, France, UK).

In a similar vein to the wonderful, highly emotive John Lewis 2015 “Man On the Moon” Christmas ad featuring a lonely old man, performed poorly against the same research methodology. Like the adidas ‘Break Free’ spot, this ad was based on a depressing depiction of ageing. 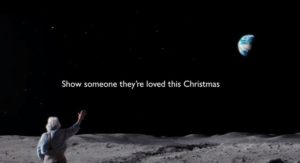 The darker side of ageing can be a depressing subject and not one that will lead to positive purchase intent. Cheap shots at the heart strings may deliver awareness but may not deliver sales. Worse, these negative depictions are often filtered through the lens of young creators and do not always reflect the reality (both positive and negative aspects) of modern ageing.

Having said all that, I generally applaud the growing focus on older people in advertising as a reflection of our social reality. It forces minds, young and old, to think and act on issues that need open discussion.