A wakeup call for all those who design apps. Consider users of all ages! 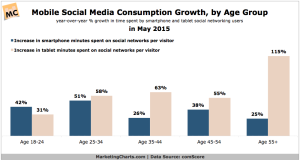 But as an illustration of how the Millennial frenzy is being fuelled, just read the headline to the original story from online research company ComScore;