Last year in the USA, vinyl unit sales totalled 9.2 million, up from 6.1 million in 2013. And album sales between January and March of 2015 were 53% higher than during the comparable period last year, driven by a 66% increase in catalog album sales (released at least 18 months prior) during the same period. 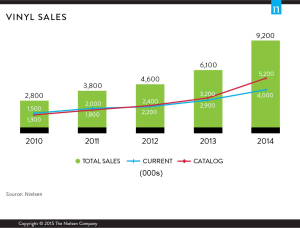 And it’s not just the classic rock gods who are seeing vinyl sales lifts. Sales of current releases on vinyl are up 37% in the first three months of 2015 as well according to this report from Nielsen.

And it’s not just older buyers who are switching to vinyl!

MusicWatch estimates that more than 16 million Americans age 13 and older bought vinyl records. Half of vinyl buyers are between the ages of 18 and 34, while 25% of are age 50 and older.