US drug industry spending on consumer ads grew to $4.54 billion last year, 21 percent more than in 2013.

As reported here on Bloomberg Business, Pfizer led the pharmaceutical industry in advertising in 2014, boosting spending even as other corporate giants such as P&G, Toyota and L’Oreal cut back underlining again the power and influence of the older consumer. 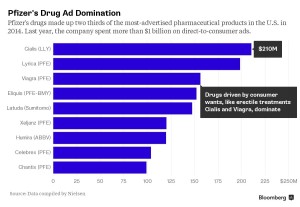 Drugs for chronic conditions dominate the top 10, as pharmaceutical companies increasingly use TV to advertise to the baby boomer generation who are more likely to be in need of such therapies.

Pfizer had seven of the top 10 most-advertised drug brands, with ads for erectile dysfunction drug Viagra, blood-thinner Eliquis and arthritis drug Xeljanz all in the top five. Those are among its biggest sellers, and made up $10.5 billion of Pfizer’s $45.7 billion in drug sales last year.

The question begs however, if there was a 21% increase in adspend, how much more money and effort was invested in improving the customer experience across all the touchpoints of the customer journey for these mature consumers?