Anyone who has been to China in the past 10 years will have seen the older folks dancing at dawn and dusk in public squares, car parks and outside residential complexes.

But according to this article from the Financial Times, this exercise which is preferred by millions of Chinese, mostly retired and mostly female — has led to frequent complaints from workers whose sleep is disturbed by the pensioners and their ghetto blasters. So the Government has stepped in to regulate “Twelve government-approved dance routines, complete with “scientifically designed gestures that will bring people positive energy”, according to state media. 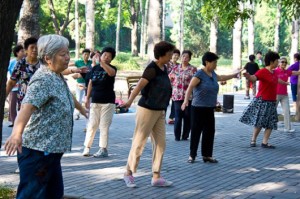 Unwittingly, the State General Administration of Sport’s mass fitness department seems to be promoting an age-neutral approach to the issue saying that the exercises were choreographed by experts to be “suitable and scientific for all demographic groups”.

The routines, will be introduced to local fitness sites in 31 provinces and municipalities in the next five months.

Funnily enough, about 4 years ago I made a recommendation to a major global sports brand to develop a line of clothing, gear and accessories to support this sport among the older population.

Of course, nothing happened. Opportunity missed.