From 1997-2005, incidence of chronic diseases such as heart disease, diabetes, and cancer quadrupled in Southeast Asia. Last year, China became the world’s second fattest country after the US, with 46 million Chinese adults obese and 300 million overweight. 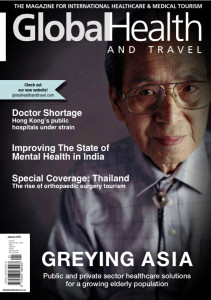 These trends have unequivocally translated into a booming demand for healthcare services, prompting both the public and private sectors in countries across the region to massively expand healthcare and healthcare technology infrastructure.

Silver Group is extensively quoted in this lead story appearing in the January 2015 issue of Global Health and Travel.