Data suggests that by the time most CEOs make it to the corner office, their most creative, innovative years are behind them. 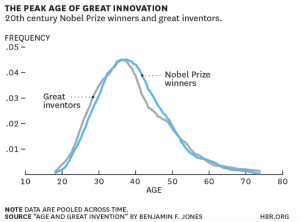 This research suggests that the innovators in both groups did the bulk of their breakthrough work in their 30s and 40s. Virtually none of them completed it before age 20, but only 14% did so after age 50

Of course, the CEO job also requires more than creativity, and additional years of experience may help with
this broader set of duties. For instance, researchers estimated the peak age for good financial decision making to be 53. So while creativity is probably in decline for most people by the time they hit 50, other critical management skills are still improving.