Apart from their potential for gathering sports activities, navigation, phone calls and apps, smartwatches could also serve as proof of identity, a travel ticket holder or a method of making payments at the checkout.

And according to an international study conducted by GfK, older generations seem more open to using smartwatches for online identification. The survey asked 1,000 smartphone owners in each market if they would be interested in being able to carry out specific functions via a smartwatch, assuming they could save and send their data securely.

One has to wonder ‘why?’ it is that older folks seem more relaxed about security. Perhaps the answer lies in further data which shows the interest in using a smartwatch for health data increases with age. Nearly half of everyone surveyed across the five countries say they would be interested in using a smartwatch to provide doctors or hospitals with their personal healthcare data. 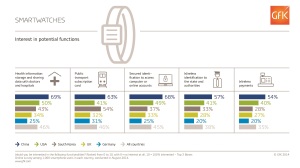