An article I wrote in Campaign Magazine. Enjoy! A few weeks ago I wrote about some ‘strategies that work’ when advertising to older people and I promised to follow-up with some strategies that don’t work. Well, here we go.

Australian research found that 67% of 45 to 54 year olds said advertising was not in tune with their needs or entertaining to watch. Similar research from around the world supports these findings.

Why is this so? Moreover, why is it even necessary to have to point out what is so blindingly obvious to the more mature consumers among us?

According to the UK’s Institute of Practitioners in Advertising (IPA) back in 2011, the average age of an employee in the advertising industry was 34. Observation suggests the average might be even younger in the Asia Pacific region. By sobering contrast, David Ogilvy was 39 when he wrote his first ad and spent the next 25 years actively involved in creating advertising. The point is, that as the median age of populations has grown older, the age of people charged with selling to them has fallen.

So ‘what’s the problem?’ you might ask. If a 50-something can write Nike ads aimed at teens, why can’t a 20-something write an ad for oldies? Answer, projectable experience. We’ve all been teenagers but nobody can imagine what it’s like to be older. That only comes with age. At least an older person will know that their experience of youth is dated and will take advice to achieve a current view.

The default route for most young marketers is to extrapolate from their parent’s or grandparent’s behaviour. The point of all this is that most examples of ads that piss off older people are clearly not written by older people.

Here are a few examples and lessons to be learned;

Use of talent is always tricky one whether it’s teens or oldies. Older people tend to be more comfortable in their own skin. The most common offenders are the use of ‘health freaks’ and ‘supermodels’. 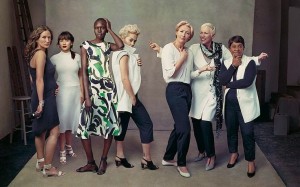 If the audience happens to still be fabulous looking and in terrific health, that’s fine. If not, you’ll simply piss them off. Marks & Spencer has been using an age-spread of ‘famous’ models in its advertising of late, but the latest campaign has been criticised for failure to depict the range of shapes and sizes that come with age and that while these women may be famous in the mind of the photographer (Annie Leibovitz) they did not resonate with the intended audience. A classic mistake of defining the audience from your own opinions and values. 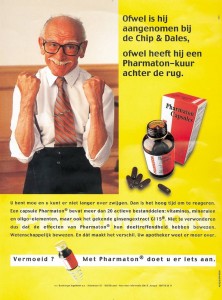 As mentioned in our book, Marketing to the Ageing Consumer, humour is a powerful tool but it is difficult to get right and potentially destructive when it goes wrong. It is particularly difficult to use humour that spans multiple generations. Also, there’s a big difference between cheeky irreverence and making the consumer look like an idiot. This print ad for a vitamin clearly falls into the latter category.

Because there are so few ads in total aimed specifically at older people it’s difficult not to mention the bad ads that are aimed at all ages but include older people. Given the growing population size and wealth of these mature consumers, brands should be cautious about how they use older people in their ads regardless of whether specifically aimed at them or not. Funny though they are, I would suggest that the v series does little to build empathy with their older customers, of whom there are many.

Just to remind ourselves that self-deprecating, age-related humour can be used to good effect, here’s the marvellous Hamlet Photo Booth ad from a few decades back plus an ad for John Smiths featuring Peter Kay, a UK comedian.

3) Talking up and talking down

In my [previous article] I referenced the adage ‘never talk down to a teenager’ and my newer twist on that; ‘never talk up to a senior’! Younger marketers often make the tragic error of thinking they’re talking to their parents or grandparents when selling to older consumers. The media is full of patronising images of frail and weak elderly.

Teenagers and seniors (and everyone else for that matter) know exactly how old they are and don’t want to be reminded of their age when they’re being sold to. Also, people respond to cues that are aimed at eye level – neither talking up to them, nor talking down. The use of patronising language is a major ‘no-no’.

A study by Yale University warned that using ‘elderspeak’ or otherwise talking down to elderly people by referring to them as ‘sweetie’ or ‘dear’ could have a detrimental effect on their health! Here’s an ad for stairlifts which is created on the premise that “we understand that talking about stairlifts isn’t easy…”. Apart from the incredulous acting, do they really think that people of this age and in need of such a device would find this a delicate subject to discuss? I think not.

4) Turning back the clock

One of the reasons the creative industry gives for using younger people is that a person’s perceived and chronological age are different. They argue; if 60 year olds think of themselves as being 40 then appealing to a 40 year old might be best done using somebody aged 25. Herein lies the trap of confusing ‘youth’ and ‘youthfulness’. One is a state of mind, the other is how people look and behave when they are young. 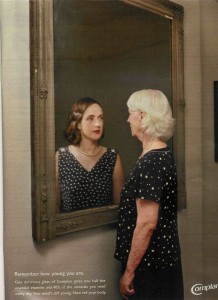 A 65-year olds’ idea of youthfulness is far more complex than wanting to look and behave like they did 10 or 20 years before. In 2007, Maurice Saatchi’s investment company ‘Saatchinvest’ bought the Complan nutrition brand and ran this series of ads that implied that older people would prefer to look younger. Disaster! Even the masters can crash and burn!

Brands often mistakenly believe that to attract the older consumer they need to scream the intended age through advertising or on packaging. In December 2012 P&G repacked some of its Crest and Oral‐B Pro‐Health For Life dental products “Selected for Aged 50+ Consumers”. This marked the first time that a P&G campaign has been directly marketed to the 50+ population. At the time, Silver Group could not understand why they were overtly mentioning age but thought they must have a devious plan. Clearly they didn’t. Now look at the packaging shown on their website – all mention of 50+ appears to have gone. Recently, P&G announced they are to re-enter the adult incontinence market. Let’s see if they have learned a lesson.

Perhaps the only time the overt use of age labelling works is when it results in a discount or other privilege. But keep it discrete it you want to succeed. Generally, it is safer to assume that using a mix of creative that proclaims a product or service is for old people is a high risk strategy. For starters, what to call them? Elder, Senior, Silver, Older, Geezer, Geriatric, Silver Fox, Golden Ager, Old Timer, Oldie, 50+. Any one of these is likely to piss-off some older folks. Better to avoid that can of worms altogether!

It is critical for marketers to realise that most older people do not think of themselves as old and are just as likely to go on the same holidays, buy the same products and live similar lives as younger people, albeit with some physical deterioration. Take Apple for example. In 2009, 46% of Apple’s customer base was age 55 and older according to MetaFacts Research, nearly double the share of average home PC users. Yet nowhere does Apple overtly identify with this user nor do they exclude older consumers from their marketing – a shining example of an Age-Friendly brand.

Every single day, more than 87,000 people around the world turn 60. They have more money and they have more time to spend it. Brands that exclude these consumers, intentionally or not, are missing out. To retain and attract these valuable customers as they age, marketers must apply Age-Friendly principles across the entire customer journey.