More than one third of seniors (37 percent) say they exercise every day compared with 26 percent in 2013, and 39 percent say they rely on themselves for the motivation to live a healthy lifestyle according to the United States of Aging Survey. 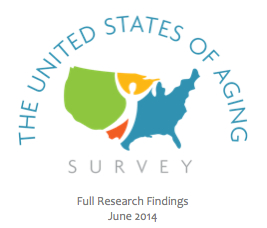 Now in its third year, the study explores different perspectives on ageing preparedness. It comprised 3,279 telephone interviews, including nationally representative samples of Americans 60 and older and adults 18-59.

To download the report in various formats, visit this page.