Concern about one’s physical appearance fuels a huge component of developed economies, extending across clothing, makeup, hair care, weight control, and cosmetic surgery industries. So it is interesting to see research from Gallup among 85,000 Americans, that shows seniors are more confident in their physical appearance than any other adult demographic in America. Two-thirds (or 66%) of Americans age 65 and older reported feeling good about their appearance, rating their confidence level at a four or five on a five-point scale.

Gallup suggests that as people age, perhaps a different set of societal expectations and appearance standards lead to a renewed sense of confidence. In an image-conscious society where beautiful men and women flood the screens and pages of Americans’ various mediums, it isn’t surprising that many are left feeling inadequate.

This study did not include a measure of the actual physical attractiveness of the respondents, so there is no way to judge the relationship between Americans’ confidence in their physical appearance and how others regard them. However, older Americans’ looks are generally out of sync with the youthful standard of beauty that prevails in American culture, and yet they are most happy with what they see in the mirror.

The chart below shows that for both men and women, confidence in their physical appearance is lower in middle age than in young adulthood, yet gets higher during their senior years. 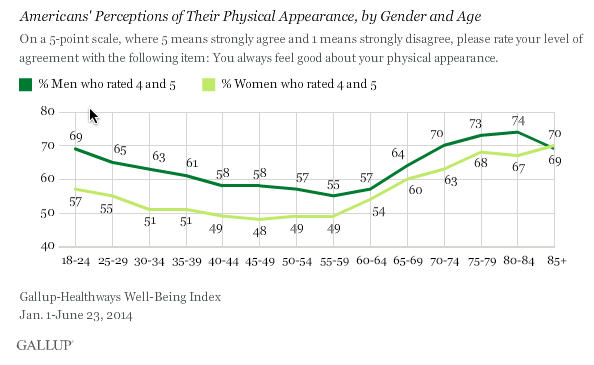