But older people who, despite being slower, managed to keep up with their younger counterparts.

These findings come from new research based on analysis of thousands of hours of playtime covering 3,305 players (aged 16-44) of the online game StarCraft 2 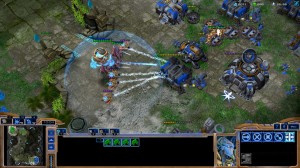 , a strategic real-time war game — like speed chess in space.

Data was analysed to look at how long players took to react to their opponents.

After around 24 years of age, players show slowing in a measure of cognitive speed that is known to be important for performance. But compared with younger players, the older players were more likely to use sophisticated short-cuts to make up for their slower reaction times.

Although a relatively young cut-off age at 44 years, this adds to an increasing body of thinking (and research) that argues cognitive decline among the elderly is a myth; that older people know more and use it better.