Many supermarkets and banks require employees to take a care support training lesson sponsored by the Health, Labour and Welfare Ministry.

By the end of 2013, the number of dementia care assistants under the state-sponsored training initiative had surpassed 4.75 million nationwide reported here in the Japan Times. 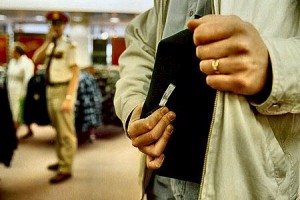 When shopping in large stores, people with dementia tend to get lost or act erratically, sometimes grabbing food from shelves and eating it on the spot, for example. In banks, it is not unusual to see senile people standing baffled at an ATM as they try to recall their password. (heavens, I do that myself!)

The complexity of the problem is compounded by some of the elderly who attempt to shoplift with impunity by pretending to be senile. Recent Tokyo Metropolitan Police figures revealed that nearly a quarter of all shoplifting arrests in the Japanese capital Tokyo last year involved pensioners over the age of 65,

At Aeon stores, where around 38,000 Aeon employees have taken the lessons, misbehaving customers presumed to be suffering from dementia are quietly led away, rather than being reprimanded in the open, and their family or a local administrative office is notified if necessary.

As ever, Japan gives the world an opportunity to learn what to expect in an ageing society.