By now, everyone should know the disproportionate economic power of the older (50+) consumer. Yet many media channels (particularly in the Asia Pacific) remain focussed on the younger audiences and fail to realise the value of their older viewers. 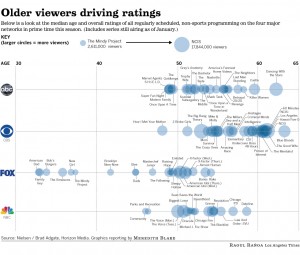 And if anyone needed convincing of the importance of their older audiences, this infographic from the Los Angeles Times says it all.

It shows the median age and overall ratings of all regularly scheduled, non-sports programming on the four major networks in prime time this (2014) season.

Apart from the mid 30’s (young mothers?) it seems the only people watching TV are over 50!

A few years ago, a powerful television executive looked at me incredulously when I suggested that he conduct a similar analysis of their older viewers in Asia Pacific – that they should charge a premium for their older audiences. As I recall at the time, they did not ‘sell’ audiences over 45 years of age. Nuts!

Maybe charts like this one can help change outdated opinions?