Are we in danger of creating unrealistic ageing stereotypes in our determination to dismantle them?

A tuxedo-wearing pianist in action, a life saver in full garb and a defence force representative are among 15 people aged in their 70s, 80s and 90s who gathered on Adelaide’s HenleyBeach for a photoshoot to portray their lives, roles and sea of knowledge in a bid to challenge the stereotypes of ageing. Reported here in Australian Ageing Agenda. 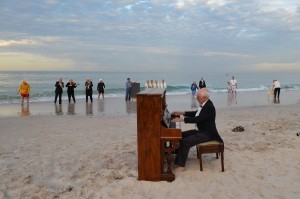 Also assembled on the shores were a lawyer, choir members, musicians, a teacher, an architect, a grandfather, a javelin thrower, and a vision impaired person with a guide dog.

The scene was orchestrated by artist Andrew Baines who was approached by ACH Group’s Foundation for Older Australians to create an installation that would challenge common perceptions of older people.

Mr Baines responded with the Sea of Knowledge concept. Last Thursday he carried out his vision in front of interested locals, family members of participants, and local identities.

I love to see these positive images of older people but I sometimes wonder if the portrayal of extraordinary people as ageing ambassadors, has a positive influence on perceptions among younger people but disenfranchises older people who cannot relate to such ‘pristine’ examples.

What do you think?