In the book; Marketing to the Ageing Consumer, we identify 25 physical effects of ageing and the consequences (both positive and negative) for business.

But this article mentions other sneaking signs of old age, and what you can do to tackle them. If you think of them in the context of innovation, each one presents a range of product opportunities. 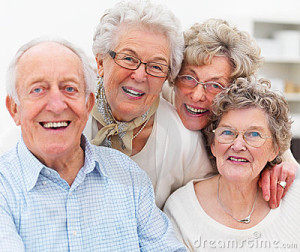 Teeth do become longer with age. Just as skin loses elasticity and plumpness, the tissue in our gums lose bulk and volume, causing gums to shrink back – gum recession can increase the length of the teeth by up to a quarter of an inch, a phenomenon known as tombstone teeth.

Our gums start to deteriorate from the age of 40, exposing the dentine that makes up the root of the tooth. But it’s important to avoid over-aggressive brushing, which can slough off gum tissue.

An older voice is often weaker and hoarser – this is because, as with all muscles in the body, the ageing process affects the vocal cords – the two folds of elastic muscle that stretch across the larynx (or voice box) at the top of the windpipe.

The vocal cords produce sound when they clash against each other – the changes in the cartilage weakens their action, so the voice becomes quavery and higher pitched.

In women, the hormone estrogen protects the cartilage, delaying changes to the voice. However, after the menopause, says Mr Rubin, lack of this hormone can cause swelling in the vocal cords, which makes the voice sound much lower.

Using the voice is the best way to stave off the ageing process, says Henry Sharp, consultant ear, nose and throat surgeon at East Kent Hospital. Talking and singing are helpful ways of doing this, acting as a form of physiotherapy, to make sure the voice is used regularly.

This is not only because we become physically less active, but as we get older we lose muscle mass. This loss of muscle slows down our metabolic rate – the number of calories we burn to keep the body functioning at rest – so our propensity for storing fat increases. A growing number of middle-aged people are developing allergic rhinitis. This allergic reaction to pollen and other substances is characterised by sneezing, a constantly runny nose, itchy, streaming eyes and a prickly throat that just won’t clear.

At least four million people aged between 45 and 65 suffer from allergic rhinitis, according to the research company Datamonitor Healthcare.

One theory for the late onset of this condition is that our immune system becomes compromised, perhaps as a result of illness, stress or simply ageing. Another possible cause is increased air pollution.

Fom the age of 40, the ageing process triggers the production of coloured warts.

Known as seborrhoeic keratoses or senile warts, these are common, harmless, often pigmented growths on the skin – though they can become itchy and inflamed.

They also may get larger with age. Treatment includes freezing them with liquid nitrogen (cryotherapy) or scraping them off (curettage) under a local anaesthetic.

EARS, NOSE AND FEET GET BIGGER

Unlike bones and muscle, our ears, nose and feet continue to grow as we get older. The ears are made up of cartilage, a flexible connective tissue which, unlike bones, continues to grow until we die.

Cartilage also becomes thinner with age, causing the skin to stretch and sag, so the ears stretch down and the tip of the nose lengthens and droops.

Meanwhile, our feet become longer and wider with age, as the tendons and ligaments that link the many tiny bones lose elasticity. This allows the toes to spread out and the arch of the foot to flatten.

Some over-40s can gain as much as one shoe size every ten years.

WAKING UP WITH A HEADACHE

A headache that wakes you up after a few hours’ sleep or a headache after a cat nap is age-related.

This type of headache – a hypnic headache – produces a dull ache at the back of the head and tends to happen only in the over-60s.

However, the causes aren’t clear. Treating them with general painkillers such as paracetamol can stem the symptoms. However, a caffeinated drink such as an espresso before going to bed can also stop them happening.

The theory is that the caffeine somehow has an impact on the central nervous system. Ironically, even though caffeine is associated with disturbed sleep it seems that sufferers of hypnic headaches don’t have this problem.

The older you get, the more easily you may find yourself getting tipsy, thanks to physical changes in the body. As we get older, the rate at which the liver metabolises or breaks down alcohol slows down. It also takes longer for the kidneys to excrete broken down alcohol from the body. As a result, alcohol stays in the system for longer so it takes less time to feel its effects.

A study at the University of Kentucky found that older adults (aged 50 to 74) who are social drinkers can become impaired by alcohol after only one or two drinks.

A visible pulse or pumping in the neck may appear alarming, but in women it is most likely to be a sign of ageing. As women get older, they can lose height as the spine starts to shorten as a result of bone-thinning conditions such as osteoporosis. This can lead to up to a two-inch loss from their original height.

Due to reduced space in the neck because of a shortened spine, the large arteries in the neck have to coil into a big loop, which causes them to bulge out at the base of the front of the neck.

This makes the pumping of the blood very visible. It’s particularly noticeable in slim women, since less fat means it’s easier to see the arteries just beneath the skin. The condition doesn’t seem to affect men.

Over the age of 60 we are more likely to suffer with watery eyes, or epiphora. Often this is caused by age-related narrowing of the tear duct.

Since ducts act as a drainage mechanism, tears overflow onto the face rather than draining away.

Sometimes the condition will resolve itself over a few weeks and the duct will open, though a blocked duct can be corrected with surgery. As we get older, our skin loses its ability to retain moisture and so becomes drier. It then loses its protective moisturising barrier in the superficial or upper epidermis layer of the skin.

Without this protective layer, skin is more sensitive to chemicals in detergents and cosmetics. So suddenly you may find yourself having an allergic reaction to a product you’ve never had trouble with before.

The number of glands that secrete mucus around the vocal cords to lubricate them start to decrease as we get older.

The lack of mucus irritates the throat, triggering a tendency to clear the throat more often. One solution is to keep the voice hydrated by drinking at least one and a half litres of fluid a day.

BEING ‘DISTURBED’ IN THE NIGHT

Many people mistakenly think that waking up to go to the loo is an older male problem caused by prostate problems.

In fact, this is a typical sign of the ageing process. It usually starts around the age of 50 and is caused by the kidneys producing too much urine at night, and affects men and women equally, according to urologists. As we get older, our bodies produce less of the antidiuretic hormone whose function it is to enable us to retain fluid.

Few of these ageing symptoms would require ground-base R&D. Rather they are line extensions of existing brands, adaptations of established products or simply repositioning of brands to appeal to be inclusive of older consumers. i.e. becoming age-friendly.

Our ideation workshops never fail to find ripe opportunities. Contact us at: info@silvergroup.asia