SoftBank (Japan) Mobile store is training and hiring a “senior crew” to sympathetically explain the know-how to their peers. That’s a very age-friendly sales approach because as one crew-member put it; “It’s hard to ask young people questions and they already assume you know a lot.”

As explained in this article from the New York Times, one such crew member is 77 years of age.

This led me to wonder about the product line up available for older phone users beyond the famed Raku Raku phone from made by Fujitsu for NTT Docomo.

The newest release is the 204SH and the choice of features is interesting. 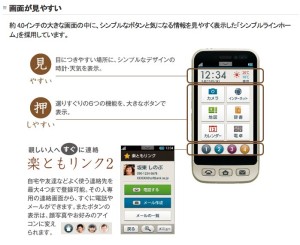 Headline text boasts the “simple design” for the “easy-to-read” clock and weather. 2nd bullet point is about how the icons for frequently used functions are grouped on the home screen using large icons.  The buttons below are speed dialling.  It looks like the objective is to meet most consumer needs without ever leaving the home screen. 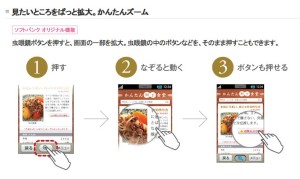 4G is not highlighted, meaning this is probably still 3G — I’m guessing because they think seniors don’t need faster download speeds. A bit more surprising is the decision to leave out the mobile payment function. Possibly considered too complicated — or too risky — for seniors?  But I would have thought not having to handle cash would be a plus, particularly when they’re increasingly doing their daily shopping at convenience stores. 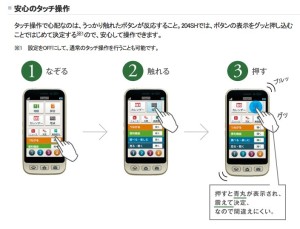 As always, it’s hard to know how many of these features were “selected” for older people, and how many are there simply because of manufacturing efficiencies or other production-side issues. 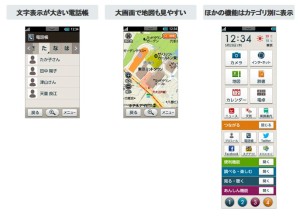 As for the website itself, I couldn’t find any mention of the ‘senior-crew’ in-store service, but suspect it’s available in limited locations during limited hours.

The Softbank line-up featured (in Japanese) on their website here, does not make blatant reference to “senior”, rather the individual models are named with “kantan” (simple) or “shimpuru” (simple).  And there’s very little on the page itself highlighting the targeting. Obviously they’ve learned one of the keys to marketing to the ageing consumer is not to remind people that they’re old.

Most of the models are phones rather than smartphones, which at first I thought reflected changes in the industry overall.  But the 008Z is a smartphone, and it has been around since 2011.  I’m guessing it wasn’t a huge hit.

The layout of these web pages is simpler than on the rest of the Softbank site, and the text — especially the graphics bits — larger.  But it is not an age-friendly user experience.  For example the links menu on the left side seem pretty hostile.  Perhaps that’s due to the Japanese insistence on putting in every piece of marginally relevant information, just in case someone ever needs it.

Many thanks to my friend, David Rudlin in Tokyo for his contribution to this article.