The government has just enacted a law aimed at compelling adult children to visit their ageing parents. The amended law says China considers it a long-term strategic task to actively confront the challenges posed by an ageing society.

Officials claim that efforts will be made to boost people’s awareness on adapting to an ageing society and urge the public to care for and help the elderly. 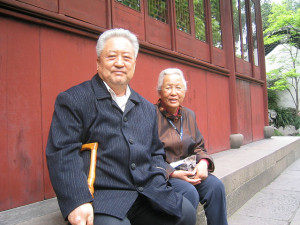 China was home to over 184 million people over the age of 60 by the end of 2011, who accounted for 13.7 percent of the population, according to official figures. China’s elderly population is expected to exceed 200 million in 2013.

The government aims to provide basic living, healthcare, housing and other services to poverty-stricken elderly, and it will support those elderly who are disabled but have no supporters to rely on.

Local governments will be required to roll out measures that encourage organizations or individuals to offer elderly-care services, while improving supervision over nursing homes for the ageing population.

Moreover, government authorities should thoroughly consider the needs of the elderly in urban and rural development project plans, with an aim of creating a safe, convenient and comfortable environment for them, according to the law.

Many of China’s current development projects are designed based on the needs of the young population and are inconvenient for the elderly. For example, some six- or seven-story apartment buildings in cities just have no elevators.

India’s problem similar but not as severe

The elderly in India comprise a relatively modest 7.5 per cent of the population. Yet a survey of 1,900 senior citizens from 12 cities in India to understand the sentiment of senior citizens in the country, points up some sobering concerns around loneliness and security:

Given the tremendous emerging need for senior housing in India, real estate companies are catering to a population that is living longer than ever before. In some cases, the brand that is trusted and most habitually use becomes almost like a life partner.