In the U.S., Millennials and Boomers represent roughly the same number of consumers—but that might be where the similarities end according to this study from Nielsen.

As covered in our book ‘Marketing to the ageing consumer’ real changes to the brain begin in the mid-50s when distraction suppression mechanisms are weakened. Nielsen reports that as early as the mid-40s there are severe and dramatic drops in neurotransmitter levels—dopamine and serotonin in particular. Dopamine drops lead to thrill-seeking behaviours to compensate. Serotonin drops lead to the feeling that something is missing—typical for midlife crises of career and relationship.

By comparison, here’s what the reports says about Millennials. 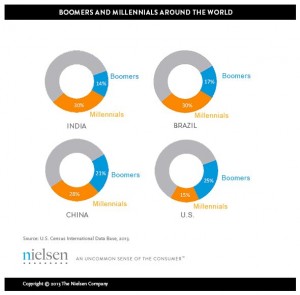