Older individuals could find themselves reading faster and with less effort on a tablet even though people young and old prefer reading paper books to tablets and e-readers. The news came from a small study released in PLOS ONE.

Reported on NBC News, the researchers concluded that the iPad’s (tablet) backlighting, which was adjusted to the brightest setting, made the difference. All tablets use backlighting, while e-readers use what’s called an E Ink display that provides less contrast than a brighter tablet (although it allows people to read in bright sunlight).

Among 360 readers ages 21 to 34, no difference in reading speed or brain effort was detected between reading via a book, a Kindle e-reader and an iPad. But big differences were recorded among 21 users ages 60 to 77 when they read the same text on paper instead of the devices. In fact, using an iPad improved speed and reduced effort compared to paper and e-readers. Researchers measured eye movements and brain activity from EEG readings to determine ease of reading. 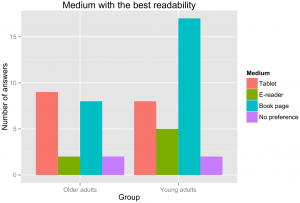 Traditional e-readers were no help: Reading a short page of text on a Kindle took the older group about 28 seconds, the longest of the three. Switching to the printed book shaved 1.5 seconds off the time. But reading on an iPad took just 24 seconds, that’s 2.5 seconds faster than reading on paper. While that may not represent a big timesaver when skimming news headlines, it could save hours reading “War and Peace.” 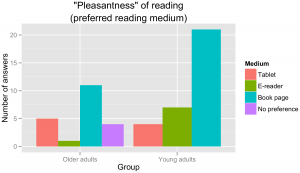 But despite the physical findings, older adults and their younger counterparts said they got more pleasure reading from a paper book. The researchers said this was evidence of a cultural bias against digital books rather than a cognitive phenomenon.