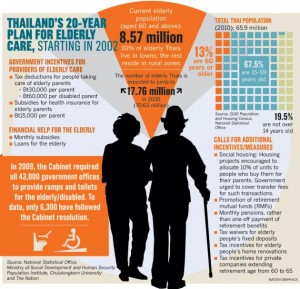 According to one Government official quoted in an article in The Nation, the master plan for 2002-21 is “now at the halfway point without any concrete achievements. There are multiple measures that are not enforced, though projects to deal with different aspects must be implemented at the same time.”

In Thailand, from 2022, every year one million will join the ageing group. The government will not be able to sustain them under the current circumstances.

According to the United Nations Population Fund’s Thailand office, in 2008, the government financed 23 per cent of total health expenditures of Bt367 billion, which accounted for 4.25 per cent of gross domestic product (GDP). Much of the expense is financed by the elderly or their families. In 2009, their personal care expenditures reached Bt122.3 billion or 29 per cent of the total and could rise to Bt210.4 billion or 31 per cent in 2015.