Only 8% of people 50+ believed ads are currently “aimed at them”.

This is despite findings from the same Mintel Research showing that : 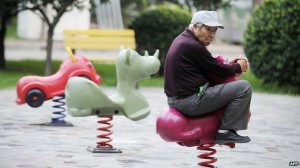 Mintel’s research director for Asia Pacific was quoted as saying; “China’s elderly, clearly a group with money in their pockets, do not feel like there are enough goods or services that are targeted at them.”

China has one of the world’s fastest ageing populations. By 2030, the country will have more people over 50 than the entire population of the USA.