According to The Economist, in the past China’s National Bureau of Statistics (NBS) has counted anyone between 15 and 64 years old as of working age. That age range is consistent with international convention and China’s own statistical yearbook. 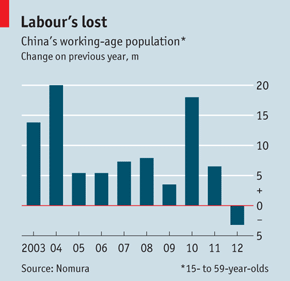 But in announcing the decline last week, the NBS adopted a narrower definition: 15- to 59-year-olds. By doing so, it drew early attention to a demographic downturn that will soon apply to 15- to 64-year-olds and to the population as a whole.

China can ‘boast’ the largest and one of the fastest ageing populations on earth. But as workers age, they may no longer be suitable for factory jobs that require dextrous fingers, or for some construction work, which requires a strong back.

But older workers could take over service jobs in supermarkets and health spas or as security guards which are now done by youngsters. That would free young people to man China’s assembly lines.