Interestingly, the company will focus on the older consumer and has no plan to market its mainstay productssuch as the high-performance Arrows smartphone series overseas due to the overwhelming competition from Apple and Samsung. 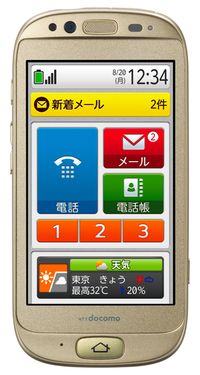 Reported here in the Asahi Shimbun, Fujitsu will sell the Raku-Raku (easy-to-use) smartphone in the United States and Europe after making certain modifications for each country. Fujitsu released the smartphone in Japan this past summer.

The Raku-Raku Smartphone is designed with a number of age-friendly features for “first-time users”. These features that address various aspects of ageing physiology covered in our audit of age-friendliness including eyesight, hearing, dexterity and cognitive issues. Key features include (see Fujitsu’s website for a full list of features):

Since the launch in 1999 NTT DoCoMo’s bare-bones Raku-Raku Phone series, sales have topped 15 million units according to the Nikkei Weekly.

It will be interesting to see which telco’s seize the opportunity to snap up the Raku-Raku phone (a name change might be in order) for their local markets.