With China’s enormous and rapidly ageing population there is an urgent need for solutions to accommodate and care for them.

By 2030, China will have 340 million people over 60. This figure will be 47 million more than the entire population of the USA in the same year. 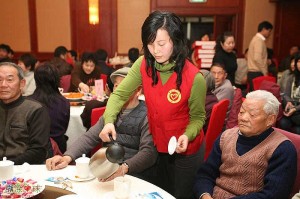 The social challenges were revealed in a recent poll by CCTV, the state broadcaster about ageing parents among their children:

The Chinese governments response is known as the Nine-Seven-Three policy: 90 percent of aged individuals will remain in their own home; 7 percent will move to low-cost, government-sponsored care, and 3 percent will reside in expensive, private services. Clearly, opportunities exist for businesses with expertise in building and managing such facilities.

One of the more up-market options is Yanda Fantastic Age group. By about 2015, they plan to have 12,000 locations across China. They also plan an additional 3,000 bedrooms in its associated, state-of-the-art medical centre.

An article, although clearly written by someone for whom English is a second language, provides some staggering stats about the ageing phenomenon in China.