According to a new report, the market for health and wellness among people 40 plus is under-addressed in India today. These people “are keen on prolonging their youth and increasingly willing to invest in staying young and fit”.

What is puzzling about the report however, is that it talks about the current size of the 40 plus population being “greater than than the total population of the US” yet the opportunity among the 40+ consumer is somewhere in the distance. Why not now, I wonder!? 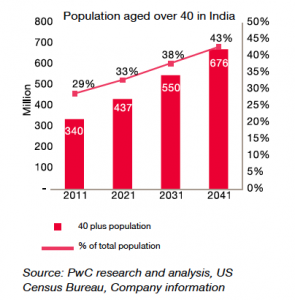 About the ageing Indian consumer the report says: