Leading executives at Unilever, Nestle and retail groups discuss the importance of the ageing consumer in this article from the Financial Times.

It’s always encouraging when people in stratospheric management positions in powerful global companies seem to ‘get it’. 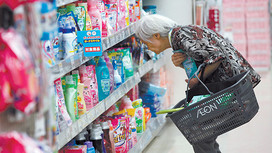 A couple of useful facts and quotes here:

“These are the wealthiest, most active, healthiest and longest-living retirement generation in the history of the world. Ageing is a global trend, and we want to learn” – Jerry Black, executive vice-president and chief strategy officer at Aeon, Japan’s largest supermarket group, which opened the specially designed Chiba mall in April this year.

Aeon says the financial services partners it works with – Nomura Securities and Dai-ichi Mutual Life – report 20 per cent more consultations in its elderly-friendly store than in conventional bank branches.

Paul Bulcke, chief executive of Nestlé, likes to point out that the slow-growth world is home to two of the fast-growing groups: the obese and the elderly. Nestlé has started using a machine that tests the strength required to open its products.

“We have a lot of work to do on this. It is all a new area for us, it’s a new area for the whole industry. Older people want spicier tastes. As people get older their taste buds start going, so, in the US, Mexican food is doing well, not just among the Hispanic community. Easy to open packaging is key,” Nigel Bagley, director of customer relations, Unilever.

Those over 65 watch the most television in the US – close to seven hours a day – they are targeted by only 5 per cent of advertisers – Nielsen.