AARP’s new print and online campaign emphasizes the purchasing power of the organization’s audience of people over 50. 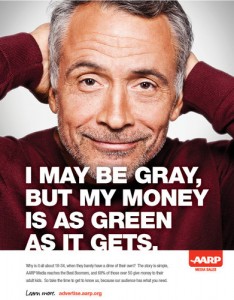 The campaign is  aimed at advertisers features people in their 50s and early 60s, and argues that brands should be focusing on them, not younger 18 to 34 year-olds. 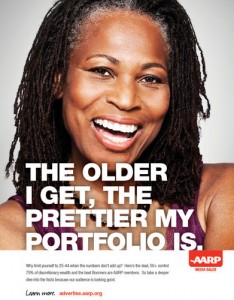 The campaign, will be introduced Monday in Adweek and will appear on Web sites including LinkedIn, Mediabistro and Business Insider. Along with advertisers, ads are aimed at chief executives, marketers and media planners.

As is pretty common the world over, this article in the New York Times explains that the American advertising industry in general puts an overemphasis on youth, and when boomers were young that was a very good advertising strategy, because when boomers were 35 in ’75 or ’85, there were 70 million of them. But that needs to change.