Although pouches have been prominent in Europe, Central and South America for five years or more, the USA seems to be slowly catching on to the trend. Campbell and Heinz are the latest companies that have put items in pouches instead of bottles or cans. They site cost savings and see pouches as a more eye-catching alternative. But are they age-friendly? 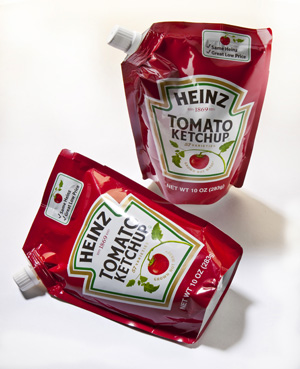 Those small twist off nozzle caps seem difficult for older hands to grip!

A UK study by Age UK and TNS in November 2010, revealed that nearly half of over 65s can struggle to take lids or caps off products such as plastic milk bottles or jars because of the packaging and over half have difficulty reading the instructions on food products as the print is too small (54%).

Data from Mintel indicates that overall pouch use in consumer products, including shampoo and pet food, has increased 37% since 2007, according to market research firm Mintel Group Ltd., with particular growth in snack pouches.

According to this article in the LA Times, pouches also are becoming more prevalent because technology has improved, doubling average shelf life to two years from one. Manufacturers can cut packaging costs 10% to 15% by going to the pouch.

For Campbell, the move is part of a battle for credibility with millennials, those ages 18 to 34, who tend to associate its iconic red-and-white cans with Grandma’s house. The company is looking to baby boomers’ children as they’re starting to set up households and making a big bet on pouches to catch their attention. The irony of this is that grandma would now struggle to open the old red & white can, so surely it would make sense to ensure that the new packaging can be easily ‘managed’ by all adults?

For Heinz, however, a flexible pouch is being used to introduce a smaller size of its namesake ketchup. With a squeezable pouch and a nozzle, the 10-ounce product will sell for 99 cents compared with $1.99 for a 20-ounce bottle. Is their ageing consumer influencing this strategy?