Central Sports, Japan’s second largest gym company plans to open 30 gyms for the elderly across Japan over the next five years, as part of its long-term strategy to tap into the nation’s rapidly ageing population.

Covered in this article in The Telegraph, Central Sports began in 1970 by offering swimming for children, but over the years, the market has shifted towards more elderly customers. The average age of gym members is currently 50 and rising. 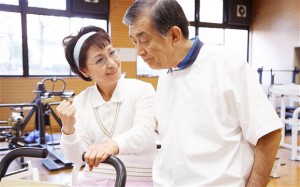 Instructors at the Japanese gym are the only people below retirement age – and most of those working out are well into their eighties.

The change of focus is being actively encouraged by the government, with public subsidies for companies which develop services targeted exclusively at the elderly.

At the gym in Saitama elderly members are each picked up and dropped off at home by a company bus and engage in: