Only one-third (31%) say they ‘mostly’ understand the information panels/labels on food packaging according to this excellent report from Nielsen. 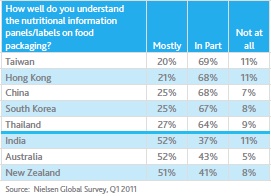 While the report doesn’t break out the age groups (what a bummer!), we know that attention to nutrition, obesity and it’s attendant diseases are of critical importance to older people.

The report also reveals the stunning fact that more than half the surveyed consumers globally, consider themselves overweight and Asians seem more inclined than others (74%) to exercise as a means to manage their weight.

Both globally and within the region, food label confusion is highest in the Chinese-speaking world and other Southeast Asian markets. Just around one-fifth of consumers in Taiwan and Hong Kong (20% and 21%, respectively) and one-quarter of
respondents from China and South Korea (25% each) indicate they mostly understand the nutritional labeling.

However, among Asia Pacific markets, reported understanding of food labels is much higher in India, Australia, and New Zealand,
where over half of consumers say they mostly understand nutritional data—among the highest reported levels in the study.

Clearly there’s a job to be done in educating Asian consumers about the nutritional facts as well as the marketers who need to do a better job to make their labeling more age-friendly.