A growing number of senior citizens are competing at major athletic events like marathons, and some are outperforming athletes half their age according to this article in the Huffington Post.

Studies show that regular exercise and training can slow the degeneration of bone density, muscular development and balance in older adults — three physical functions that decline with age. And although ageing inevitably has a negative effect on sport performance, one 2008 study of competitors in the Senior Olympics — age 50 to 85 — from the American Journal of Sports Medicine, found that major declines in performance time don’t occur until after age 75.

Here are some all-star champions:

Don Pellman, age 96, holds four U.S. track records in his age group, including the 100-meter dash, and four world records. Although he did high jump in college, he told masterstrack.com that he didn’t participate in dedicated exercise or sports for 58 years, save for occasional social activities like bowling, golf and softball. 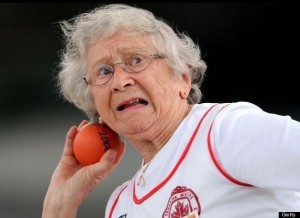 The 92-year-old Canadian super-athlete holds 23 world records and 17 in the 90 to 95 age bracket for track and field events, according to a 2010 story in New York Times Magazine. Since that time, she picked up seven wins at the 2011 World Masters Athletics Championships in July. Doctors found that her muscle tissue is deteriorating at a far slower rate than would be expected for her age.

Wombach, age 83 and a heart attack survivor, is a senior Olympian and a record-holder in the high jump. Stroebe, meanwhile, was a lifelong skier who took up triathlons at the age of 77. Even after a collision on the slopes that left her with a broken left leg in January 2009, she continued to compete in triathlons until the age of 91.

At age 80, Whitlock ran a marathon in 3:25:04 — a respectable time for a man one-quarter his age. His fastest recorded time, at age 73, was 2:54, according to Running Times Magazine. While he was a track star back in high school and college in his native England, Whitlock dropped the sport when he moved to northern Ontario for work. He took it back up at the age of 41 at the urging of his wife.

Raschker, holds 68 gold medals at the World Masters Athletics Championships and 22 World Masters Records for both outdoor and indoor events, is considered one of the best athletes in the world — of any age. She’s also a two-time Sullivan Award finalist and a motivator for competitors.