Japanese councils are coming up with new ways of dealing with an ageing population: keeping them fit.

Tsukuba’s two special fitness parks, which opened last month at a cost of 3m yen (£20,000) each, are already proving popular with the town’s older residents. Nationwide, the number of pieces of workout equipment for the elderly has tripled since the late 1990s to well over 15,000, according to the government. 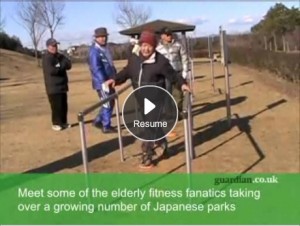 The parks also perform a crucial social service in a country where an increasing number of people live alone. By 2025 more than a fifth of households will comprise an elderly person living alone or an elderly couple, according to the national institute of population and social security research in Tokyo.

Check out the video.