47% of Japan’s wealthy are over 66 and 15% are over 75. But excluding Japan, the High Net Worth Individuals (HNWIs) in Asia-Pacific 68% are relatively young (31–55 years of age). This shows that a large wave of wealth transfer will occur over the next decade in the APAC region. 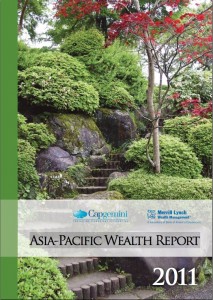 This according to the 2011 Asia-Pacific Wealth Report published by CapGemini and Merrill Lynch. Download here.