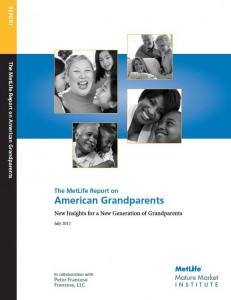 Grandparents are responsible for 25% of all toy sales in the USA. Toys! Makes sense when you think about it.

Here’s a terrific new report from Metlife in the USA which you can download free here. The MetLife Report on American Grandparents
New Insights for a New Generation of Grandparents

The key findings reveal the power of this group: