Another robot to assist the elderly has been unveiled in Japan.

As reported in The Nikkei Business Daily (Sept 11, 09), The National Institute of Advanced Industrial Science and Technology (AIST) unveiled a healthcare robot designed to support preventative and rehabilitative exercise for the elderly. The 70cm-tall robot looks like a stuffed toy, but the cuddly exterior hides a hard body built with 20 joints, each capable of moving with 26 degrees of freedom. Servo motors control the different parts of the body and allow the robot to move slowly but smoothly. 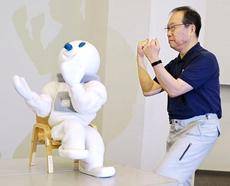 The robot is programmed to perform about 30 different exercises, most of them while sitting in a chair.

The robot also has built-in speech recognition software so it can respond to commands from an exercise instructor. The idea is to use the robot to encourage elderly people to exercise along with a class.

The robot is being used on a trial basis at the Ibaraki Prefectural Health Plaza, which participated in its development. General Robotix Inc., an AIST spinoff, was also involved and plans to offer the robot for short-term lease starting next fiscal year after further work is done to improve operability and lower costs.