One of the known effects of ageing is a natural decline in the brain’s ability to process visual information. One of the activities most affected is driving, a task that demands you simultaneously track multiple moving objects, often at the edge of your field of vision.

The decline of this capability may be one of the reasons the elderly have to stop driving. But experts say that the speed and accuracy of the brain’s visual processing can begin to gradually decline in middle age or even earlier. 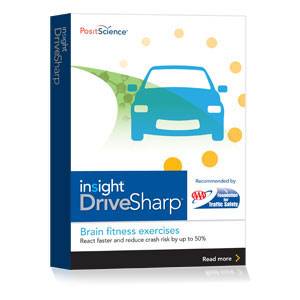 Now there’s a software program, for both PCs and Macs, that claims it can “train the brain to think and react faster on the road” by putting a user through brief, repetitive exercises aimed at bolstering his or her visual-processing prowess. It’s called DriveSharp, and is from a San Francisco-based company called Posit Science. which also produces other brain-training programs.

DriveSharp isn’t a driving simulator, but a pair of simple-looking visual memory games, plus assessment tests, that Posit Science says are based on published scientific research. The company says it purchased a training technique that researchers have proven to be effective at improving visual processing.

As this article in The Wall Street Journal explains, Posit Science makes some strong claims for DriveSharp. It asserts that people who use the program as directed (at least three times a week for 20 minutes at a time) can cut their “crash risk” by 50% and stop their cars 22 feet sooner at 55 miles per hour. It says these users can expand by 200% their “useful field of view,” the area within which you can take in details with a single glance.

And the company adds that, if you use DriveSharp as instructed for a total of 10 hours, its positive effects can last for several years. To back up these claims, Posit Science cites a number of scientific studies and articles published in well-known journals.

The DriveSharp software, is sold both online (US$139) , or for $99 from participating AAA Clubs. (The AAA Foundation for Traffic Safety has endorsed the product.