The Virtual Console takes players down video gaming’s memory lane. It offers a large collection of games created for past Nintendo consoles like Nintendo Entertainment System and Family Computer. The store also sells games that were originally released for the company’s competitors and allows players to download arcade video games. 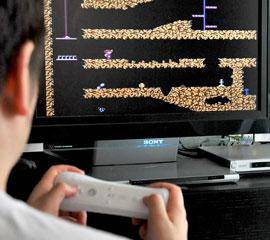 And the strategy is working. The Virtual Console is attracting droves of old gamers who had stopped playing “Space Invaders” and other classic titles but are now jumping on the opportunity to relive their childhoods. Or teen and college years.

At the end of March, the company started adding video arcade golden oldies to the Virtual Console’s game archive. One of them, “Space Invaders,” which was all the rage about three decades ago, has been an instant hit.

Nintendo is also expanding the archive by steadily releasing old titles for past consoles of other makers, such as the Neogeo and Sega Master System. A total of 34 game makers now supply titles for the Virtual Console.

Nintendo has sold more than 8 million Wiis in Japan, according to Enterbrain, which publishes video game magazines. More than two years since its launch, however, the pace of sales is slowing.

The company has also produced remakes of such classics as “Super Mario Bros.” and “Tetris” for the Nintendo DS handset.