As in many other Asian countries, the elderly in Thailand have been relatively ignored compared to other groups in society.

But recently installed Prime Minister Abhisit Vejjajiva has initiated a monthly allowance of Bt500 (US$14) for people who are 60 years and older. While clearly a populist move, it has been welcomed by senior citizens, many of whom are in need of support. Almost half the people aged 60+ are in the agricultural sector and still live in poverty. 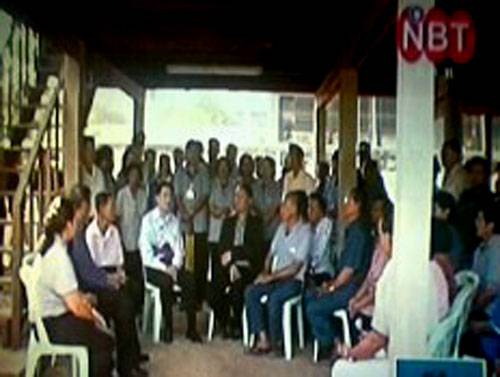 When he visited Lop Buri he drew strong interest from the elderly.

The elderly now comprise 11 per cent of the 64 million Thai population. Such a large demographic group cannot be taken for granted or ignored. The welfare system should reach out to the elderly more effectively. One statistic shows that many elderly people are illiterate. Sixty-nine per cent of elderly people have only an elementary education, while only 2.8 per cent finished college. The average age for female senior citizens is 75.7 years, vs. 68.4 years for men. If this group cannot function well in society, there will be further problems because in the near future, the average longevity of Thais will rise to 80 years.

At present, Thais don’t take the issue of senior people seriously because most still live with their families. More than 90 per cent are with their children. Only 7.7 per cent live alone, but that number is increasing.

The family institution that used to support this group will become weaker and the question is how to empower senior citizens in the future so that reliance on the family is not seen as a necessity.