Around 15% of Japanese aged between 47~ 52 are willing to adopt new lifestyles and eager to spend despite being burdened by their children’s education expenses and housing loans. They are more affluent than those around 40, and tend to be more loyal customers according to research just out from the Nikkei Marketing Journal and reported in English by the Nikkei Weekly. 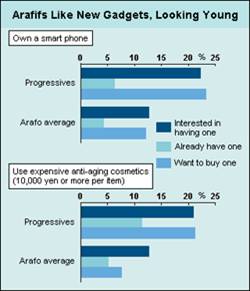 The study covering 2,000 people found that these people are showing themselves to be more willing to spend than other age groups. And their appetite for consumption could help prime the economic pump.

Respondents were given five questions about their interest in staying young and another five about their propensity to spend. The answers were quantified so that the respondents could be categorized. About 15% received scores that categorized them as “progressive,” which, among other things, means they are keen on retaining their youth.

Their interest in cutting-edge products is as high as that of young people. After all, they were the first generation to snap up the Walkman when Sonyreleased the portable cassette player in 1979.

Among the progressives, 45.0% said they own portable music players and 37.1% said they either are looking to buy one or replace their current player. The latter figure is 6.4 points higher than that for arafos. For digital single-lens reflex cameras, 25.2% of arafifs said they want one, leading the younger group by 6.7 points. 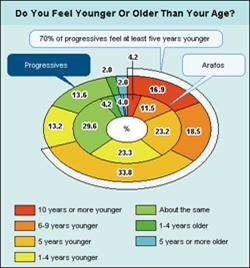 Among the Progressives, 69.2% said they feel at least five years younger than their biological ages. Almost 30 points higher than the average for those around 40.

The respondents classified as “not-so-progressive” are thriftier, but 24% of them said they are young at heart. Once their household finances improve, some of them are likely to join the progressive group.

Among the “progressives”, 77.2% said they speak frequently with their spouses, and 73.4% said they often go out together, 10-20 points higher than those for people around 40. Among the older progressives, 22.8% said they hold hands or walk arm in arm, 5.5 points more than the average arafo couple.

The ‘progressives” average net household income in 2009 is estimated a 9.34 million yen, 60% more than the average for 40’s. Their average savings stand at 11.09 million yen, or 77% higher than that of their younger counterparts.

Among this older group, 20.5% live only with their spouses, with no children or parents at home to care for. Nearly half are double-income households, and 12.5% are single without any dependents.